Capital management companies are inter alia bound under the Derivatives Ordinance (DerivateV) to be given particular importance to the risk management and risk measurement when derivatives are used in the investment fund. It was originally intended to implement this obligation in 2013 in a joint project with PSplus Portfolio Software + Consulting GmbH for Flossbach von Storch AG. In a follow-up project from 2019, the entire module was then thoroughly revised for additional customers.

Essentially, there are two major quantitative requirements for risk measurement within DerivateV. On the one hand, it is important to estimate the risk on a daily basis. The value-at-risk is used as a risk measure for a holding period of 20 days and a level of 99% and the individual risk factors must be identified individually. On the other hand, suitable stress tests have to be implemented in order to be able to simulate unusual market movements. 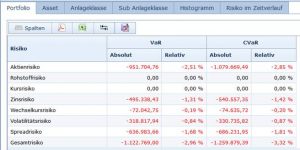 Illustration 1: Exemplary presentation of the results from the VaR calculation

Since classical risk models (eg variance-covariance approach or historical simulations) fall short for these challenges, a modern statistical procedure, namely the Block Bootstrap, was used within the project. Random blocks of historical returns are simulated within the procedure to simulate possible future developments (so-called paths). In addition, additional functionalities were implemented that go far beyond the mere implementation of DerivateV and offer portfolio managers great added value. For example, the expected shortfall was implemented as a further measure of risk, making the holding period and the confidence level more flexible and implementing the fair value loss or rather the marginal VaR ratios.

Illustration 2: Overview of the simulated paths through a histogram

In the last revision, Quasol’s focus was on further refinement of the underlying algorithms. On the one hand, other types of securities were added (including Floater and Pensions-Future). On the other hand, the computation time was reduced by approximately 75% or rather further parameterizations with the focus on longer holding periods were made possible (inter alia, a trend elimination or the consideration of coupons). Parallel to this work, PSplus significantly extended the interface, so that graphic graphical evaluations are now also available.

Illustration 3: Presentation of the risk over time

In contrast to the VaR module, which focused on individual extensions, the scenario module was completely redesigned. While scenario building used to be relatively inflexible and customization options limited, the user now has fully customizable software available. For each risk factor, it is now possible to individually determine how the scenarios are to be defined. For example, it is possible to divide stock prices by sector, while for the interest rates the term and the rating are being consulted parallelly. This allows the users an optimal adaptation to the existing internal processes.

Illustration 4: Exemplary parameterization of the interest rates within a scenario 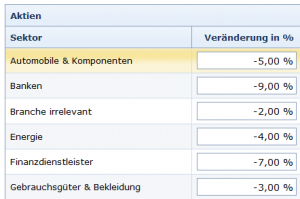 Illustration 5: Exemplary parameterization of the shares within a scenario

As a project result, our customers now have access to a powerful and tailor-made tool for risk measurement and control.

Facts of this Case Study

“We have been working with Quasol Calculation cores since 2011 and have already been able to solve various quantitative questions. Especially with the implementation of the DerivateV, it was a great advantage to be able to rely on Quasol’s financial know-how.”

How can we assist you?

Are you facing a challenge in which we can help? Let's talk.
Contact us now
Can’t find what you are looking for?
We develop solutions for your individual problems. Please feel free to contact us!
Contact us now. 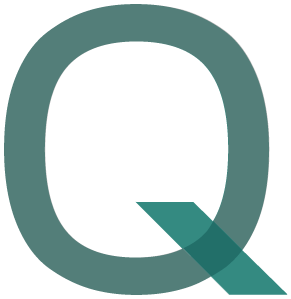